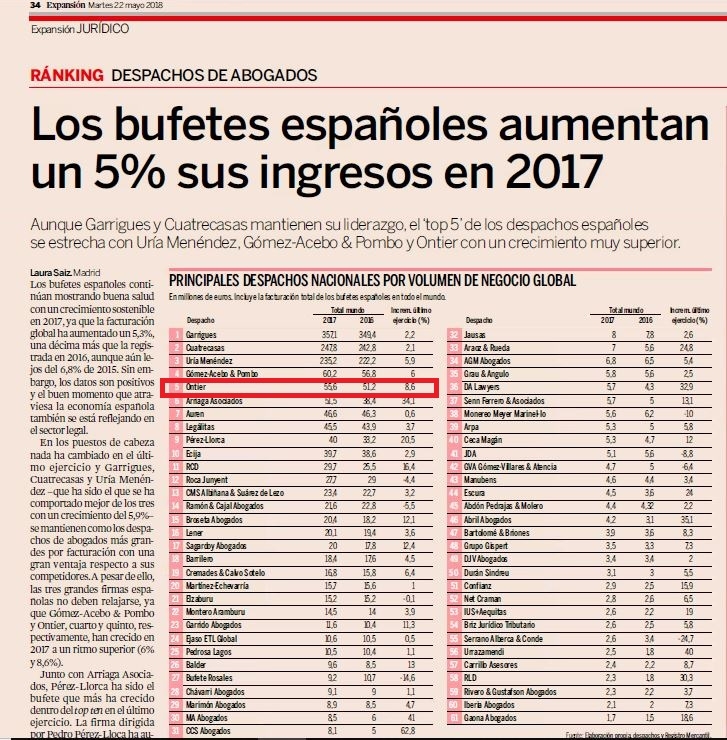 ONTIER Steps Up in the Expansión Legal Ranking 2017

Expansión has once again published its annual ranking of law firms, which this time shows great results for ONTIER: the firm has consolidated its presence in the top 5 of Spanish law firms by revenue. It should also be noted that the firm has stepped up one position in the turnover ranking in Spain, ranking 25th in 2017.

The firm had a turnover of 22 million euros in 2017, with an increase of 4.1% in the revenue obtained in Spain, ranking 25th in the list of law firms with the largest footprint in the country.

In addition, ONTIER consolidates its position among Spanish law firms by revenue generated abroad, behind only Garrigues, Cuatrecasas, Uría Menéndez and Gómez-Acebo&Pombo. Of all these companies, ONTIER was the one that grew the most in 2017, with an increase of 8.6 percent in total turnover, which totalled 55.6 million euros last year. Nobody has grown more than ONTIER in the Spanish top 5.

Another important figure is ONTIER's third position by revenue generated abroad, with 33.6 million euros, behind only Uría Menéndez and Garrigues.

You can check out all the rankings by Expansión down below (SP only):